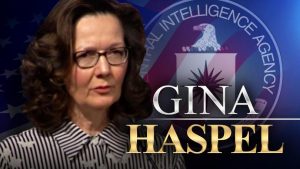 Gina Haspel is the president’s nominee for CIA Director. She participated in and supervised torture. Indeed, she was an enthusiastic supporter of it.

There’s also significant evidence that she destroyed videotapes of these events, in violation of the law and even a specific court order. If she were proud of her work, if in “the cold light of day” we could be pleased by her actions, she wouldn’t have done that.

Along comes National Review editor, Rich Lowry, who suggests we’ve woken up from the national nightmare of 9/11, and only now in “the cold light of day” can we see that our leaders went a bit too far. But don’t blame Dear Gina…

She was just following orders.

If only we had a lesson from recent history, that could tell us that “just following orders” is no defense for shocking immoral mistreatment of other human beings.

Conservatism used to pretend it was a philosophy. [It was always an emotional resistance to change. Men like Russell Kirk and William F. Buckley dressed it up with a set of doctrines to make it seem coherent.] Philosophical conservatism’s chief value was the preservation of tradition. History mattered and contained lessons for us. It taught us to “live in the cold light of day.” Violating traditions had consequences. The dangers were so steep, and we were so susceptible to forgetting them, that enforcement was required. Conservatives would ask, “How else will someone learn?” Only mushy-headed liberals rejected discipline.

But now, Rich Lowry is more concerned that “critics ignore the context” of her work. Without a hint of irony, he labels criticism of her record “demagogic” and “unfair.” Instead, Lowry…

Here’s what you need to know about Zubaydah’s torture.

Is this what conservatism reduces to? When confronted by fear, forget the traditions handed down and act like barbarians?

While conservatives were ushering in darkness, there were people who knew better and said so.

Libertarians are concerned about moral and intellectual consistency. And they have principles that they ponder and debate in “the cold light of day.”

At the Zero Aggression Project, we’ve chronicled many of these “rules of thumb.” We call them Mental Levers because they’re powerful shortcuts to knowledge. That is, in the midst of darkness and crisis, you can use these rules like flashlights, to illuminate the darkness. You might be doubted and even despised when you do. But you’ll find, in the long run, that you don’t end up writing apologies for people and times that now embarrass you.

In this case, I would offer two Mental Levers…

Law and morality are NOT the same thing
This 248-word Lever applies a lesson from the Nuremberg trials — that it’s an insufficient defense to claim, “I was just following orders.”

When coercive authority is offered, it turns out no one is qualified to follow orders
The Milgram experiment scientifically demonstrates the dangers of obedience. Check out this mini-article, which will take you about 100 seconds to read.

Using these Mental Levers — utilizing this kind of thinking — is what keeps libertarians in “the cold light of day” when conservatives shrink into the darkness. We’re also waiting in that same cold, light when these conservatives emerge with their suggestions that there are no lessons to be learned from their dance in the darkness.
—–
Jim Babka is the co-creator of the Zero Aggression Project and the President of DownsizeDC.org, Inc.