Perversion: the distortion of something from what was intended.

Representative democracy is intended to provide self-rule. It does nothing of the sort. The logic is inescapable…

Read that again. Let it sink in. 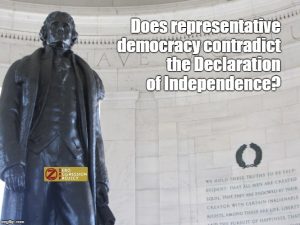 The Founders actually understood this problem. They attempted to solve it by crafting the Bill of Rights. This was supposed to limit government to the protection of rights as described in the Declaration of Independence. That would have given us true self-rule. Alas, the Constitution itself violated the Declaration’s definition of legitimate governance, and the Bill of Rights had no enforcement mechanism. So the result is tyranny of the majority and the aggressive leviathan state we have today.

The solution is voluntary funding for government combined with strong jury nullification. That would give us consumer-controlled governance, or what we call post-statism. Dissenters could withdraw funding from any action that violates their conscience, and individual jurors could nullify any aggressive statute by hanging juries. Then Americans would finally, at long last, enjoy true self-rule.

31 Responses to "Is democracy inherently perverted?"